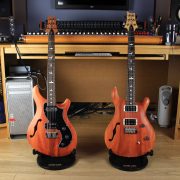 PRS Guitars is proud to offer a small batch of “Reclaimed Limited” CE 24 Semi-Hollow and S2 Vela Semi-Hollow guitars that showcase two exotic wood species new to PRS: Peroba Rosa and Brauna Preto. This reclaimed wood, which is native to southeastern Brazil’s Atlantic Forest, is typically more than 100 years old.  PRS Guitars Senior Wood Manager, Michael Reid, sourced these woods from old buildings, noting that their density, unique aesthetic, and history would lend them to guitar making. We’re pleased to announce that these are available across Europe now!

“Michael has been sourcing wood for me and the company since before there was an official ‘PRS Guitars.’ Wood is our lifeblood, and I trust Michael’s instincts. This old, reclaimed wood is wonderfully resonant and beautiful. Hearing these guitars now, I just have to smile knowing Michael was right again,” said Paul Reed Smith.

Peroba Rosa (photo above), typically used as siding, was selected for the top wood. The density of this wood combined with the semi-hollow body construction gives the Reclaimed Limited CE24 Semi-Hollow and S2 Vela Semi-Hollow a unique sound that is punchy but also warm and full. Brauna Preto (photo below), typically used as the supporting posts of these old buildings, is used for the fretboards due to its tight-grain and sustain. These guitars are finished in Natural satin nitro. Any nail holes and any wear or discoloration have been left in the top wood to showcase its history. By leaving the Peroba in its most “original” form, every instrument is rendered unique with each top boasting its own character.

“The forest has come full circle, so to speak. I like to think using this wood showcases Brazil’s rich history of music and guitar making,” said Michael Reid, PRS Senior Wood Manager. “Reclaiming these timbers also allows me to personally make a contribution to sustaining and celebrating Brazil’s resources.”