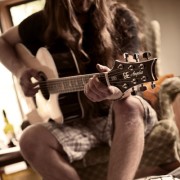 The PRS SE Angelus is a great acoustic guitar. Total Guitar magazine called it “a genuinely knockout guitar” while Acoustic Guitar reckoned “it’s definitely time to stop calling PRS an electric-only guitar maker”. And now, if you buy an SE Angelus before the end of September, you could win a recording session at the beautifully-equipped Headline Studios (www.headlinemusicstudios.com) near Cambridge!

All you need to do to be in with a chance of winning a half-day session at the studio is to video yourself playing your new SE Angelus, post it to YouTube and send us a link on our Facebook page, or Tweet us!

We’re not looking for amazing video quality (or even incredible chops), we’re just looking for some great music made on the SE Angelus. So whether you’re a singer/songwriter or a drop-tuning, finger-tapping acoustic whizz, we want to see it all.

We’ll be highlighting our favourite videos on Facebook during the competition, and will be picking two winners in the first week of October 2013.