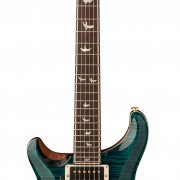 Left-handers of the world rejoice!

PRS Guitars has released a left-handed version of the most excellent 30th Anniversary Custom 24 – the original PRS. Fewer than 200 of the special Lefty incarnation will ever be made, and it’s a cracker (of course).