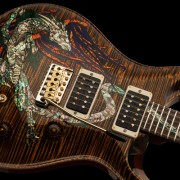 The unveiling of a new PRS Dragon guitar is always exciting – and the latest incarnation of this legendary instrument is particularly spectacular.

First glimpsed at NAMM 2015, the PRS Private Stock 30th Anniversary Dragon is the first PS version of the super-exclusive limited edition guitars whose lineage traces back to 1992. And it’s one of the most eye-catching of them all.

As with all of the previous seven Dragon guitars, the Private Stock 30th Anniversary’s most prominent feature is the sumptuous inlay work. Designed by fantasy artist Jeff Easley (famed for his Dungeons & Dragons rulebook covers), the inlay work was created by Aulson Inlay and features more than 285 individual parts fashioned from a wide array of gorgeous materials including jade, azurite, lapis, pyrite, abalone, and mother of pearl.

But the inlay is only the icing on the cake, of course.  Extraordinary Private Stock grade tone woods were hand selected for this very limited series and include a curly maple top (with a “pre-factory” style carved top and available in Tiger’s Eye and Nightshade colours), African ribbon mahogany back and mahogany neck (with “pre-factory” style Pattern Regular carve) with a 24 fret Madagascar rosewood fingerboard. The newly introduced 85/15 treble and bass pickups are some of our favourites too – really powerful but perfectly balanced and versatile as a result. And the 30th Anniversary Dragon’s hybrid hardware includes PRS Phase III locking tuners and the PRS patented tremolo system.

Only 40 of the Private Stock 30th Anniversary Dragons will be produced, with just a handful heading to Europe. Demand is expected to be extremely high, so you’ll need to speak to your PRS dealer without delay if you don’t want to miss out on a piece of guitar history…